Many of my readers who enjoyed my Prayer Jars series liked it so much they began asking if I could write more about the characters in those three books. About the same time, my publisher suggested I write a mystery series that would include someone who runs a greenhouse. Since a greenhouse was mentioned in my Prayer Jars series, it seemed natural to do a spinoff and have the new series include, not only new characters, but many of the characters who made appearances in my previous series. It was enjoyable for me to revisit Lancaster County, Pennsylvania, where the series is set, since my husband grew up not far from there.

Here’s a short summary of The Crow’s Call, which is the first book in the new series, and releases the first week of March 2020: 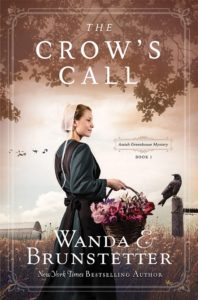 When Vernon King, his son, and son-in-law are involved in a terrible accident, three women and a teenage boy are left to cope with their deaths, as they become the sole providers of their family. Their only income must come from the family greenhouse, but someone seems to be trying to force them out of business by causing destruction to things involving their greenhouse and the property they live on. Amy King, the main character, is not only faced with the loss of her father and brother, but now Amy’s mother needs her to help run the family’s greenhouse. It doesn’t seem fair to ask her to leave a job she loves when there is still a sister and brother to help, but Amy feels she must put other’s needs ahead of her own. Amy’s sister, Sylvia, is also grieving for her husband, while left to raise two children, and Henry, the younger brother, just out of school, is saddled with all the jobs his father and older brother used to do. As Amy assumes her new role, she asks Jared Riehl to put their courtship on hold. When things become even more stressful at the greenhouse due to vandalism and threatening phone calls, and then a noisy crow shows up to taunt her, Amy worries that she might crumble under the pressure.

I hope my readers will enjoy reading all three books in the Amish Greenhouse Mystery series, learning more about the King family and the obstacles they face while trying to run their greenhouse despite the fact that someone is trying to close them down.

New York Times bestselling and award-winning author Wanda E. Brunstetter is one of the founders of the Amish fiction genre. She has written more than 100 books translated in four languages. With over 11 million copies sold, Wanda’s stories consistently earn spots on the nation’s most prestigious bestseller lists and have received numerous awards.

Wanda’s ancestors were part of the Anabaptist faith, and her novels are based on personal research intended to accurately portray the Amish way of life. Her books are well-read and trusted by many Amish, who credit her for giving readers a deeper understanding of the people and their customs.

When Wanda visits her Amish friends, she finds herself drawn to their peaceful lifestyle, sincerity, and close family ties. Wanda enjoys photography, ventriloquism, gardening, bird-watching, beachcombing, and spending time with her family. She and her husband, Richard, have been blessed with two grown children, six grandchildren, and two great-grandchildren.

To learn more about Wanda, visit her website at www.wandabrunstetter.com.