I’m excited to share Chapter 1 from Sarah Price’s upcoming book, Carolyn’s Quilt! The Amish Quilts of Indiana series focuses on a group of young ladies as they try to find the loves of their lives. I have thoroughly enjoyed each novella so far and I hope you do too. Click HERE to preorder Carolyn’s Quilt! 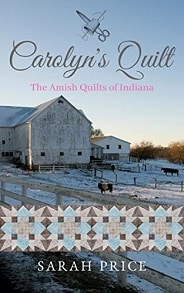 The sight of the cedar hope chest resting at the foot of her bed made Carolyn want to pull the old tattered quilt on her bed over her head and cry. Every morning, when she opened her eyes, one of the first things she saw was that hope chest—a constant reminder of what could have been.

How could something so beautiful make her feel so ugly inside? So shamed?

She remembered the day her father had given it to her as if it were yesterday.

It had been her sixteenth birthday, and when she’d walked downstairs for breakfast, the carefully crafted chest waited for her on the floor by the kitchen table. Her father stood in the doorway, his arms crossed and a grin on his face, watching for her reaction when she entered the room. Only the good Lord knew how her father had found the time to craft it by hand for his oldest child.

Despite the fact that women weren’t supposed to cry—not over something of such an earthly matter!—Carolyn couldn’t help herself and she burst into tears. It was the most beautiful hope chest she’d ever laid eyes on. Even though her mother had admonished her, Carolyn still saw a look of joy and perhaps a tiny hint of pride in her father’s eyes when she thanked him.

For the next four years, her mother had helped Carolyn fill that chest with all the items a young bride needed to start a home of their own: towels, sheets, doilies, recipes, patterns and even tiny mementos from her childhood. Just a few short months ago, Carolyn had placed the last item inside the chest: her handsome wedding quilt. Only now, there was to be no wedding, so, instead of a glint at the future, it was nothing more than a rose-colored quilt that spoke of shattered dreams.

Oh! How could she have fallen for that terrible Adam Troyer!

His sweet but deceptive words, his warm hands; hands that held hers in the privacy of his buggy under the darkness of night. And now, all she could do was replay that night in her mind, the night that changed her future forever. When he took her hand then leaned in and kissed her on their way home from the singing last summer, she hadn’t turned her head. Instead, she welcomed his lips upon hers, lips that had promised her a bright future only moments before they gently grazed her own.

But that all ended shortly after her beautiful quilt was laid in her hope chest; the promises he had whispered in her ear, all but forgotten.

Sarah Price is the author of the Plain Fame series and the Amish of Ephrata series, among other books. She comes from a long line of devout Mennonites, and her writing reflects accurate and authentic stories based upon her own experiences with several Amish communities. Visit her at sarahpriceauthor.com and on Facebook.