Beneath the Bending Skies – Rich in Detail

Do you want to be swept away to Big Sky country? Do you long for a change of pace – maybe a bit of adventure? While Jane Kirkpatrick is a new-to-me author, I can see why she has so many accolades! Kirkpatrick’s latest release, Beneath the Bending Skies, takes her readers to school in this historical fiction novel sent in 1860s Montana.

Beneath the Bending Skies follows the life – the peril, the joys, the disappointments – of one Mollie Sheehan. Mollie has had the commandment of “Honor Thy Mother and Father” firmly drilled into her head from an early age. When Mollie falls in love with a much-older Peter Ronan (a friend of her father’s), how will she be able to both and honor her father and her intended? It’s harder than she ever realized or imagined.

Jane Kirkpatrick is an amazing story teller. Based on the true story of Mollie Sheehan, Kirkpatrick expertly weaves this true story into a modern-day adventure. The author makes her reader long to see the beautiful skies and vast, blue lakes of Montana. Beneath the Bending Skies also gave this reader pause for reflection as the author told of the inner workings of diplomatic relations between the Native Americans and the White settlers. Kirkpatrick was also extraordinarily thorough in her descriptions of the novel’s characters. However, for all of it’s beauty and grandeur, this 300-plus page tome moved a bit slow in sections and I kept waiting for there to be more of an exciting climax to the various plot lines. This novel is a stand-alone and not part of a series. I would recommend Beneath the Bending Skies to lovers of history, other cultures, Montana, and/or prairie life. Definitely pick up a copy, but know ahead of time that it goes at a slow, steady pace. I was given this book in exchange for my honest review. 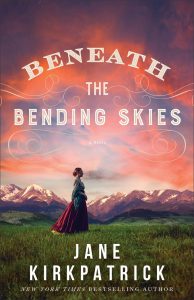 Mollie Sheehan has spent much of her life striving to be a dutiful daughter and honor her father’s wishes, even when doing so has led to one heartbreak after another. After all, what options does she truly have in 1860s Montana? But providing for her stepfamily during her father’s long absences doesn’t keep her from wishing for more.

When romance blooms between her and Peter Ronan, Mollie finally allows herself to hope for a brighter future–until her father voices his disapproval of the match and moves her to California to ensure the breakup. Still, time and providence are at work, even when circumstances are at their bleakest. Mollie may soon find that someone far greater than her father is in control of the course of her life–and that even the command to “honor thy father” has its limits.

One thought on “Beneath the Bending Skies: Review by Susan Scott Ferrell”