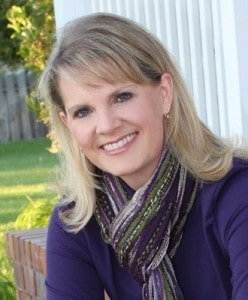 Bestselling author Kim Vogel Sawyer believes in the power of second chances — a theme she’s captured with poignant grace in her new book, When Grace Sings (WaterBrook Press/March 17, 2015/ISBN: 978-0307731333/ $14.99), which follows the CBA  bestseller When Mercy Rains in The Zimmerman Restoration Trilogy. Sawyer says the series is based on one simple truth: “God gives second chances. We as humans make our mistakes, we flounder and err and build walls that seem insurmountable,” Sawyer reveals. “When we confess our wrongdoings and ask God to redeem us, He brings restoration.”

When Grace Sings introduces readers to Alexa Zimmerman who has relocated to Arborville, KS, where she’s converting her grandmother’s farmhouse in Old Order Mennonite country into a bed-and-breakfast. Inspired by her own experience of running a B&B, Sawyer was able to depict perfectly the charm and challenges she details in the book.

Very seldom in life do we get everything “right” the first time. Humans stumble and fail. But God doesn’t want His children to remain mired in regret and “what-might-have-beens.” As silly as that might sound, God will give us a Plan B when our Plan A falls apart, and His plan always leads to satisfaction and restored joy.

Q: Is it ever too late for a second chance?

In my humble opinion, no. As long as we still draw a breath, there is time to turn ourselves around, make restitution, and start out again with renewed purpose. With God as our guide, we can make better choices the second time around.

Q: Who is your favorite character in When Grace Sings and why?

Oddly enough, the least likable character in the beginning became my favorite as the story progressed. Briley Forrester seemed such an egotistical person, cocky and uncaring. But so much of that came from a deeply imbedded sense of insecurity. As I got to know Briley, I began to admire his ability to rise above the challenges of his broken childhood. And when the Spirit began tapping at the door of his heart, I found myself actually praying he would open the door and allow God’s Spirit in! I so wanted this character — this fictional character! — to experience healing and peace. Plus, how can you not love a guy who knows how to tease at just the right moment? 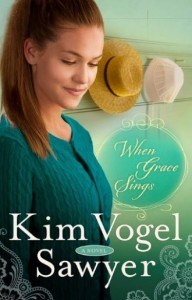 Q: Do you have a least-favorite character?

In all three books of the series, Shelley (Suzanne’s sister) occasionally made me wish I could pinch her. But she ended up endearing me to her in the end.

Q: Is Alexa starting a bed-and-breakfast inspired by your own experience as a B&B owner? If so, what is the best thing about running a B&B? What is the hardest?

I would never have considered writing a story including a B&B were it not for our experiences at The King’s Inn. The best part, easily, is meeting the people. We met so many wonderful folks we wouldn’t have known any other way. We loved the chance to spoil them a bit, to see them relax and smile, and I savored the hugs when they left. They came as strangers and left as friends. And that brings me to the hardest part—the goodbyes. It’s nice, though, that we are still in touch with many of our guests through Facebook.

Q: Alexa is suspicious of the Chicago reporter who shows up at her B&B. Do you think women should give more weight to their intuition?

My mom always said God gave us discernment for a reason. We can keep ourselves out of trouble if we listen to that little voice that says, “Be careful.” There’s a difference between being compassionate and being a chump.

Q: Why do you think family relationships can sometimes be so sticky?

Honestly, I think it’s because we expect better from family. We expect to be loved unconditionally, to be forgiven when we mess up, to feel as though we belong. When the secure base is yanked away, we flounder. When family hurts you, the wound goes much deeper than one inflicted by a stranger or an acquaintance.

Q:  You cover real-life topics in your story including single motherhood, adoption, family secrets, lost love and more. Which topic is closest to your heart and why?

Definitely the topic of raising a child who isn’t yours biologically is near and dear to me. My oldest daughter has the joy and privilege of mothering two children who were not born to her but have won such a significant portion of her heart. Watching her form a tender relationship with these children whom I love as my grandchildren has been so beautiful.

Q: A variety of family relationships are also present including mother-daughter, grandmother-granddaughter, cousins and more. Which one in When Grace Sings do you see as the most complicated? The strongest?

I think the most complicated, in some ways, is also the strongest: the relationship between Suzanne and Anna-Grace. Although Suzanne spent 20 years separated from Anna-Grace, the love that bloomed in her during pregnancy never dimmed. She is prohibited from openly embracing the child to whom she gave birth, which provides the complication, but her love for Anna-Grace is tenacious, making it strong even though it’s one-sided.

Q: Is it better to bring family secrets out into the open or to try and cover them up?

Secrets exposed to the light of day lose their power. Unless the secret would bring more pain than healing, I think honesty is the better choice.

Q: What do you hope readers will take away from your story?

The theme that rolled through the back of my heart as I wrote was a simple truth: God gives second chances. We as humans make our mistakes, we flounder and err and build walls that seem insurmountable. But when we confess our wrongdoings and ask God to redeem us, He brings restoration. It’s NEVER too late for a second chance.

Learn more about Kim Vogel Sawyer and When Grace Sings at www.kimvogelsawyer.com, on Facebook (KimVogelSawyer.Author.Speaker) or by following her on Twitter (KimVogelSawyer).