It used to be, back before every house and apartment had a dryer, that you’d see clotheslines in people’s backyards. Women would stand with the basket of wet clothes and pin them to the lines, which would reel out across the yard, the sheets and shirts and underthings blowing in the wind. That is, unless you had one of those ones shaped like a square umbrella, which were handy in that they didn’t get in the way of kids playing back there. 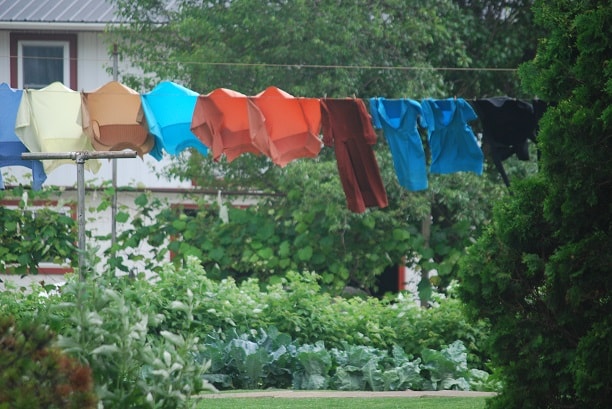 For a culture whose emphasis on conformity means that the design of every woman’s dress is just like that of every other woman in her district, and every man’s shirt the same as his companion’s in the fields, Amish clotheslines are as unique as the families to whom they belong. I’ve discovered in my rambles around the county that the laundry is usually done on Monday, the day after church. So if I time my visit carefully, I’m pretty much guaranteed as many clotheslines to enjoy as I want. 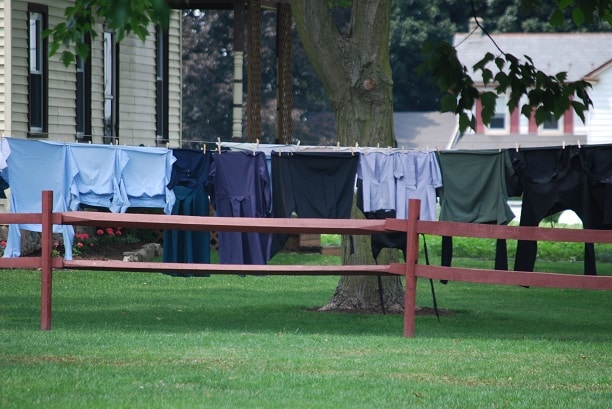 There’s even a kind of artistry about them, though the Amish fraa would laugh at the thought and shake her head at the Englisch woman with her electric dryer and her odd notions. Some lines are strung high between the barn and the house. Some are strung along the fence. And some start high in the trees and terminate at the back door, creating a steep angle of dresses in a rainbow of colors. 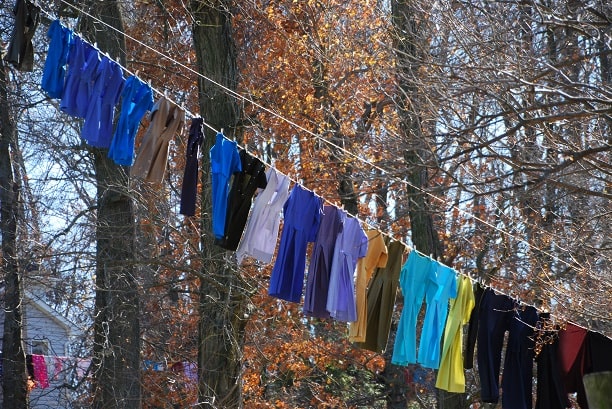 That last clothesline in particular was such a visual treat that it deserved a number of photographs. The colors—the careful gradation of dress size—simply from looking at it, I could guess that the household contained teenage girls, and the local bishop hadn’t forbidden the more, um, showy colors God created. The result was a delight to the eye, and a reminder that even in their work—especially in their work—the Amish are worshipping the God they love.

A good lesson for me as I set pen to paper for my next book.

Adina Senft grew up in a plain house church, where she was often asked by outsiders if she was Amish (the answer was no), she made her own clothes, and she perfected the art of the French braid. She holds an M.F.A. in Writing Popular Fiction from Seton Hill University in Pennsylvania, where she teaches as adjunct faculty.