I am thrilled to have Amanda Flower here today for a Q&A.
Thanks for stopping by! 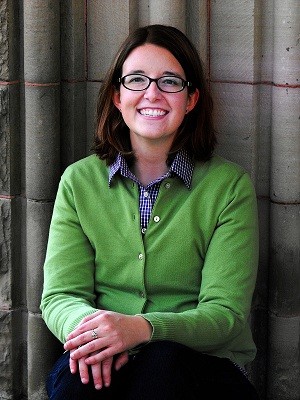 Why don’t we start by you telling us a little about yourself?

I’m a college librarian living in northeast Ohio, who spends most of my time outside of the library committing fictional murder.

Can you tell us about your upcoming book?

My next mystery novel is A Plain Death. It will release from B&H in July 2012.
In A Plain Death, an unlikely friendship between a high-tech woman and a runaway Amish girl leads to murder. Her first day in Appleseed Creek, Ohio, Chloe Humphrey, befriends Becky, an ex-Amish teenager looking for a new home. While driving Chloe’s car, Becky collides with a buggy, killing an Amish bishop in the process. The case moves from accident to murder when police reveal a cut brake line. Now, Chloe and Becky’s handsome brother, Timothy, must discover who the real intended victim is before the murderer makes a second attempt.

Is there a message in your book that you want readers to grasp?

In my Amish mysteries I highlight that one size does not fit all for the Amish. There are many differences within the orders and districts. The rules for the districts are set by the church leaders like the bishop. As an author, this knowledge was actually liberating because I was afraid that I might get an Amish rule about beard length or running water wrong. I realized that I could set my own rules for my Amish district as long as they were in keeping with the norms of the overall order.

What inspired you to write your very first book?

My very first book is Maid of Murder, which was nominated for an Agatha Award for best first mystery in 2011. I was inspired to write this novel when I was sitting in a Blockbuster parking lot when I was in college, and the protagonist India Hayes’s voice started talking in my head. India’s story is continued in the next novel in the series, Murder in a Basket, which released in February 2012.

What is your favorite thing about being an author?

There are so many wonderful things about being an author, and I’m so thankful God let my dreams come true. I have two favorites. One is holding the final book in my hand and thinking, “Wow, I wrote that!” The other is meeting readers at signings. I can’t tell you how great it is to hear someone read one of my novels and liked it or even better thought it was funny.

While writing about the Amish have you learned anything about their customs that has surprised you?

It’s been interesting to learn where different Amish districts draw the line in the sand about technology. For example for some districts, Amish can have cell phones for business use while others cannot. Also in some districts some Amish are not allowed to ride bicycles, others are. Some are allowed to use gas-powered weed whackers on their lawns while lawn mowers are forbidden. I think that is the challenge for the Amish. How do the leaders make these rules? It also fascinates me that so many Amish willingly follow the rules when they seem so arbitrary to my English eyes. However, I remember the leaders tie the rules back to faith and religion. Therefore, the leaders in a sense tell the district God wants them to follow these arbitrary rules. That’s a very powerful means of persuasion.

What question have you always wanted to be asked in an interview?

What are the names of your cats? 🙂
I have two VERY spoiled kitties. The first is a 16-year-old Maine Coon I found as a newborn in my backyard when I was a freshman in high school named Puddleglum AKA Puds. The other is a 2-year-old gray and white short hair, who I also rescued as a tiny kitten from a very bad situation. His name is Reepicheep AKA Cheeps. As you can see I am a HUGE C.S. Lewis fan. Most of my pets have been named after Narnia characters.

I just want to thank Michelle and Destination Amish for inviting me to do this interview and to join the Facebook group. It’s been fun to see how supportive the readers are of each other and the authors.

What’s next for you?

I’m very excited to share that I have SIX Amish mysteries releasing over the next couple of years. The first three are part of The Appleseed Creek Mystery Series and will be published by B&H. The series begins with A Plain Death. The second series will be published by Penguin’s New American Library imprint and begins with Murder, Plain & Simple in Fall 2013. 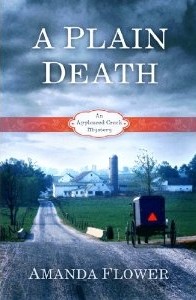 A Plain Death: An Appleseed Creek Mystery can be pre-ordered  here on Amazon or can be purchased in the Destination Amish Store.

Orders are processed through Amazon.

7 thoughts on “Q&A With Amanda Flower”