An interview with Carrie Turansky,
Author of The Daughter of Highland Hall 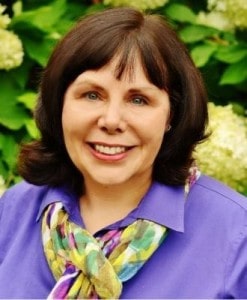 When family expectations and societal pressures collide with love and faith, which values will emerge the victor? Award-winning author Carrie Turansky explores this theme in her new book, The Daughter of Highland Hall (Multnomah Books/October 7, 2014/ISBN: 978-1601424983/$14.99).

Book two in the Edwardian Brides Series, The Daughter of Highland Hall, follows 18-year-old Kate Ramsey on a journey of self-discovery as she travels to London to make her societal debut. Her overbearing aunt insists she secure a marriage proposal from a wealthy, titled man. As Kate begins making the round of balls and garden parties, she attracts the attention of a man who seems to have all the qualifications on her list. Yet, is he the best choice? Will this lifestyle bring her true happiness?

Q: At the beginning of The Daughter of Highland Hall, readers will find the scripture Matthew 6:33. What is the significance of that verse in the story?

I chose Matthew 6:33, “Seek first his kingdom and his righteousness, and all these things will be given to you as well,” as the theme verse for this story because it summarizes the faith journey of the heroine, Kate Ramsey. The novel opens as Kate comes to London for her first season, hoping to make a good impression and find a wealthy, titled husband. She believes this will give her a prominent place in society and secure her future. But when she meets others who have a sincere faith and different goals, everything she has believed is called into question. What is most important in life? How does her faith impact her choices? Kate discovers when she lays down our own plans and seeks God first, He guides her toward the best path for her future.

Q: Your heroine, Kate, is a debutante trying to find her place in society and ultimately a husband. Why will readers be able to identify with her experiences?

Everyone wants to live a meaningful, fulfilling life. That was true in 1912, and it’s true today. Readers will identify with Kate as she faces the challenges of pleasing her family, meeting society’s expectations and trying to understand her own desires and motivations as she looks toward the future. Some of those challenges and expectations may be different today . . . but many are the same, and we can learn from all Kate experiences on her journey of faith and self-discovery. 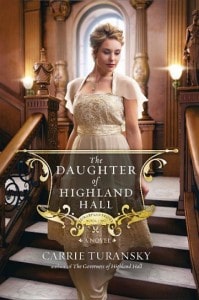 Q: The Daughter of Highland Hall is your second book in the Edwardian Bride series — what is it about that time period that interests you?

The Edwardian era (1900–1918) is an interesting time of change in England. The class system and cultural influences of the Victorian era were still present, but they were beginning to change. Many modern inventions became popular and impacted people’s lives, such as cars, electricity, airplanes and several time-saving appliances. Those make the Edwardian lifestyle similar to today, and that in turn helps readers relate to the characters and the issues they face.

Q: What first drew you to writing English historical fiction?

I enjoyed watching Downton Abbey and was intrigued by the lifestyle, time period and the upstairs-downstairs aspects of the series. I met with an editor at a conference, and she encouraged me to research the time period and submit a proposal that had a similar feeling but was unique. At first I thought the research would be too difficult. However, Cathy Gohlke, a friend and fellow author, had recently published a wonderful story set in 1912 titled Promise Me This. Cathy encouraged me to accept the editor’s challenge, and she offered me several research books. So I jumped in and discovered I loved the research and enjoyed learning more about this time period in England. The characters and story rose out of the research, and it has been a fun series to write.

Q: You’ve even taken your research efforts all the way to Europe. What were some of the highlights of your trips? Did anything you saw make it into the book?

My husband and I visited England in 2012 and focused our time in Oxfordshire, the Peak District and the Cotswolds. Our tour of Highclere Castle where Downton Abbey is set was the highlight of that trip for me. I loved seeing all the rooms where Downton is filmed, including the great hall, the library, the upper gallery and bedrooms. The gardens and greenhouse were lovely, and I had those in mind for several of the scenes in The Governess of Highland Hall. But I wanted to find a unique estate and setting for my books. My online research led me to Tyntesfield, a beautiful estate near Bristol in southwest England. It was a perfect choice. Tyntestfield is featured on the cover of The Governess of Highland Hall, and I used the interior design of this house to help me envision the scenes in my novels.

I was very excited to visit Tyntesfield in May 2014. What a thrill to see all the rooms and take a private tour of the day nursery and the governess’s bedroom! It’s even more beautiful than my online research revealed. If you’re ever in the area, I highly recommend a visit to Tyntesfield. I have a Pinterest board filled with photos to help me remember everything I saw there.

Q: How was culture changing during the period in which you wrote, and how does The Daughter of Highland Hall reflect that?

As the Victorian era came to an end, the moral climate became less strict. This is reflected by incidents in both The Governess of Highland Hall and The Daughter of Highland Hall. William Ramsey, the head of the family, is impacted by the choices of other family members and must decide how to respond. The differences between the classes were also changing. Working-class people were less satisfied with being “in service” as maids and butlers, and they wanted increased wages and benefits, putting pressure on the upper class. Taxes, especially death duties, put tremendous financial stress on families who inherited large estates. This plays a role in books one and two in the series. All these changes were even more apparent in the later half of the era because of the changes World War I brought to English society. The Ramsey family and the staff at Highland will be going through World War I in book three, A Refuge at Highland Hall.

Q: Another character in the book, Jonathan Foster, is committed to helping the poor in London’s East End. Was that common practice among physicians during that time? Was that kind of work as respected as it is now?

During the late Victorian and Edwardian eras many people became more concerned for the poor and worked for social change. Some offered practical help, including free and low-cost medical care. One of those who was concerned for the poor and encouraged practical assistance was William Booth, the founder of the Salvation Army. When he first started his work among the poor he was scoffed at and criticized. But near the end of his life he received an honorary doctorate from Oxford and was respected and admired for his work. When he died in 1912, Londoners lined the streets by the thousands to see his casket pass by. A speech given by his granddaughter, Catherine Booth, is featured in The Daughter of Highland Hall, and it has a great impact on Kate Ramsey.

Q: In Edwardian England, women had fewer options available to them, and marriage was the primary way they could secure their future. Yet books and TV shows such as Downton Abbey, based in this time period, are incredibly popular with women. Why do you think this is?

I think women love the fashions, houses, manners and social customs we see on Downton Abbey. Looking back, it seems like a “romantic” period when men were gentlemen and women were ladies. Life seems simpler, especially if you were from a wealthy family. I don’t think most women today would like to take on the role of a servant in that time period. In fact, there was a reality show called Manor House with that premise. People took on the roles of the family and servants and had to live as the Edwardians did for a period of time. Watching that series was a fun part of my research.

Q: While our modern circumstances will vary from Kate’s, we still face expectations placed on us by our family and society. How can we navigate those expectations while still pursuing God’s best for us?

Balancing our love for our family and our commitment to the Lord is an important issue. Following the principles in Scripture we can find help and guidance. When we are children we are told to obey our parents. As we get older the roles change, but we are still to honor them. That means asking for their input and advice on important decisions and listening to their fears and concerns before we prayerfully make decisions. If we’re married, our mate’s input should carry more weight than our parents’. I think meeting society’s expectations is less important than pleasing the Lord and living in a way that honors Him. Once again, using principles from Scripture and getting input and advice from wise and godly people can help us make the best decisions.

Q: What can readers learn from The Daughter of Highland Hall about the importance of seeking godliness in a mate, rather than looks, financial security or social status?

Both The Governess of Highland Hall and The Daughter of Highland Hall touch on the importance of choosing a mate who has a strong faith and good character. That is still an even more important message today. I hope the issues the characters face and the lessons they learn will challenge and encourage everyone who reads the series.

Q: Kate must ultimately decide what the right thing to do is based on her new relationship with God. How does her faith ultimately guide her?

The influence and examples of people who are strong Christians and who live out their faith in their daily lives have a great impact on Kate. When unexpected events in her family cause her to be excluded from social events, she has time to volunteer at a free clinic in one of the poorest areas of London, and her heart begins to soften and change. Rather than seeing the poor as a mass of humanity, she sees them as individuals who each have a story and needs not so very different than her own. Her growing attraction to a man with deep faith and convictions also has a great impact on Kate’s faith. Ultimately she must weigh her choices and use what she has learned to make important decisions about her future.

Q: What do you hope readers will take away after they’ve put The Daughter of Highland Hall back on the shelf?

I hope my readers will enjoy the journey with Kate and Jon and feel as though they have been transported back to London, England, in 1912. But I also hope they will be drawn closer to God as they identify with experiences Kate and Jon face and the challenges and choices they must make.

One thought on “An interview with Carrie Turansky, Author of The Daughter of Highland Hall”